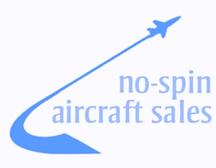 Some kind comments from happy clients!

I recently purchased an aircraft through No-Spin Aircraft Sales and wanted to rave a little bit about the experience. I could not be more   pleased with every aspect of the transaction from the initial contacts to the pre buy, through the paper work and all the way to taking   possession of the aircraft. Since I am located in Washington State and the world is in the middle of a pandemic, airplane shopping is a   little more difficult than it otherwise would be. My main goal with this purchase was to find a 182 with a corrosion free airframe. I had   physically looked at about a dozen aircraft and had contact with about 10 other sellers when I contacted David about the aircraft that       I bought. Interestingly, the day before my call to No-Spin, I had contacted a seller in San Diego. I asked if he would be able to provide   some photos of inside the airframe, to which he responded that he would be happy to do that after he received my $10K, non-   refundable deposit. Nope. When I contacted David the next day, I have to admit I cringed a little making the same request. What I got,   within a few hours, was about 20 beautiful photos. David had taken the time to open a variety of inspection ports as well as taking   pictures inside the empennage. In the next call I told him I really wanted to come and look and would be driving, how much of a deposit   would be required to hold it? The response was that no deposit was required, he would hold the aircraft until I had come to see it.

I totally enjoyed meeting David and his wife Jeanne. They strike me as completely authentic, honest and hard working. It is strongly my   impression that their business is infinitely more motivated by enjoyment of aviation, airplanes and people in the aviation world than it is   by money. I could not recommend any business or its owners more highly than I recommend No-Spin Aircraft Sales and David and   Jeanne. Please feel free to contact me in regard to this review at twolynchs@hotmail.com.

We purchased a Piper Dakota from No-Spin Aircraft Sales and David was a pleasure to work with.  He was very knowledgeable about t   this type of aircraft and the purchase process.  With this being our first aircraft purchase, he was very helpful throughout the process   and helped to ensure the paperwork and transactions went through smoothly.  He was honest with every answer, didn't try to hide   anything, and the plane has performed exactly as it was advertised.  He is very friendly and offered us many stories to listen to from his   time as an airline pilot.  David also shared a plethora of information and free advice regarding aviation and the airline industry, going   above and beyond his role as a broker.  Even before committing to purchase the plane, he gave us lots of advice and tips on how to fly   the plane during the test flight.  We highly recommend him as a Broker, especially if you are a first time purchaser, and we are very   satisfied with our plane.

October 2020 Kent and Holly Ricken, Boone CO:
No Spin Aircraft Sales was phenomenal to work with beginning to end. David and Jeanne were very accommodating before, during, and   after the purchase making sure we received documents mailed to us and that we had all the paperwork properly filed and recorded with   the FAA. This was our first big airplane purchase and a bit overwhelming but David was very patient and knowledgeable. The plane was   exactly as advertised and we have been flying and enjoying it for several months. We are very pleased with the service and highly   recommend No Spin Aircraft Sales!

David and Jeanne, Thanks again for all you have done, I believe you to be very fair to both myself and with the sellers. You   represented them very well in negotiating the deal, between all of us, providing the sellers with the insight needed to complete the   process, acknowledging their concerns and expectations, but at the same time communicated my issues to them as well. You   performed at a very professional level in my estimation. Thank you.

I was in the market for purchasing a Cessna C150/152 with the Taildragger Conversion and I contacted David, of No-Spin Aircraft   Sales. David located the perfect aircraft, a Cessna C150 Aerobat in Wyoming.  David handled everything, from locating the aircraft,   arranging the pre-purchase inspections, verification of paperwork and negotiation with the seller.  After the purchase, he arranged   hangar space until I could travel to Colorado and bring it to its new home in So. California. I am now the proud owner of a Cessna 150   Aerobat and look forward to many hours of Flying Enjoyment!  Thanks again David for all your help. I certainly couldn’t have done it   without you!

April 2015  Bill S.:
Thanks, David and Jeanne, for making the sale of my 1966 Mooney as easy as possible for me. I had been procrastinating selling the   plane for over 6 months after moving from Colorado to Texas. I did not want to bring the plane into the Houston area because of flying   conditions and weather effect on the aircraft. Then, too, being 84 with a-fib made it difficult to want to go through the hassle of obtaining   an FAA medical certificate again. So, with luck, I picked No-Spin Aircraft Sales to do the job of selling the aircraft. Three months later the   aircraft sold and everything turned out better than I anticipated. David really was on top of everything and kept me posted on events.   As much as I loved the Mooney, it was a great relief to see it have a new owner and be flying again.

January 2015  Don & Becky Spellman:
Dave did an excellent job of selling our 1959 Cessna 150 to an out of town buyer. Dave worked very hard to sell the airplane for a fair   price. We were very pleased with everything that Dave and Jeanne did for us. Thanks again.

December 2014  Steve Mortenson, Parker CO:
I had the pleasure of working with David Miller and Jeanne Gardner on purchasing a Piper Dakota recently. I only got my pilot’s license   six months ago and would not have wanted to purchase an airplane without David’s assistance. David’s knowledge of the business was  invaluable from picking the right aircraft for my mission to facilitating the pre-buy and delivery. He was always available to answer   questions and make me feel comfortable with my decisions. I feel like David’s philosophy is to create lifetime customers instead of a   onetime deal. I know that having him involved, got me my best value and it was so nice to have him convey the offer to the seller. I also   really liked how he explained the systems that my training aircraft did not have. He knows several quality individuals in the industry so it   helps me to choose who I want to do annuals, detailing, avionics etc. in the future. I could not be happier with my experience from David   and Jeanne and would highly recommend to them to anybody considering buying an airplane.

July 2014  Sean M., Durango CO:
I worked with David and Jeanne on the buy side. Jeanne did an excellent job showcasing the airplane I purchased, all over the web.   David worked all the details to make sure my buying experience was seamless and comfortable, as I am a newly minted pilot (the ink is   not yet dry on my temp license) and first time plane buyer. He went through all the maintenance logs and organized them into two easy-   to-peruse binders. He was very generous with his time, sharing his vast knowledge of aviation and avionics. He arranged for a mountain   flying lesson with an excellent instructor so I could fly the plane over three mountain passes and return safely to Durango. Then he   followed up to make sure I made it home. He went so far as to purchase fresh batteries for the GPS, even though it was working fine.   When the time comes to get a bigger, faster plane, I will definitely utilize them again.

Enlisting your broker services was the best move we made! From the start we were impressed with your professional tactics and   constant positive instruction. Your experience was evident throughout each phase of the sale. We were especially impressed with the   website you developed to show off our airplane at its best. Thank you for your efforts.

July 2014  Hub H., Monument CO:
David sold my 1975 Cardinal 177B in July 2011. I had only decided to sell it a month before. He had access to a number of clients   whom he contacted immediately. He called a prospective buyer, and took him flying in my plane. (I was out of town.) The transaction   was done immediately. He is very knowledgeable, likeable, articulate, and makes an excellent sales person. I was more than pleased   with the entire transaction.

July 2014  Honi G., Monument CO:
I wholeheartedly endorse David Miller as an aircraft broker. After buying my new Maule through Dave, he helped me sell my B-55   Baron, which was no easy task. He came through with flying colors, finding a buyer, facilitating the sale and even dealt with issues after   the sale - this insulating me from any of the post sale heartaches. I will go through David again for my next aircraft exchange.

July 2014  Dave B., Colorado Springs CO:
David Miller and Jeanne Gardner are people you can trust for either the purchase or sale of your next aircraft. In my case, I purchased   my first airplane and they made sure that I got the type of plane I wanted, at a good price, and treated me fairly in every way throughout   the entire process. My Cessna 177-B Cardinal is a joy to fly and gets admiring comments every time it's out on the ramp. I highly   recommend David and Jeanne to you. You won't go wrong by trusting them to deliver on their promises.